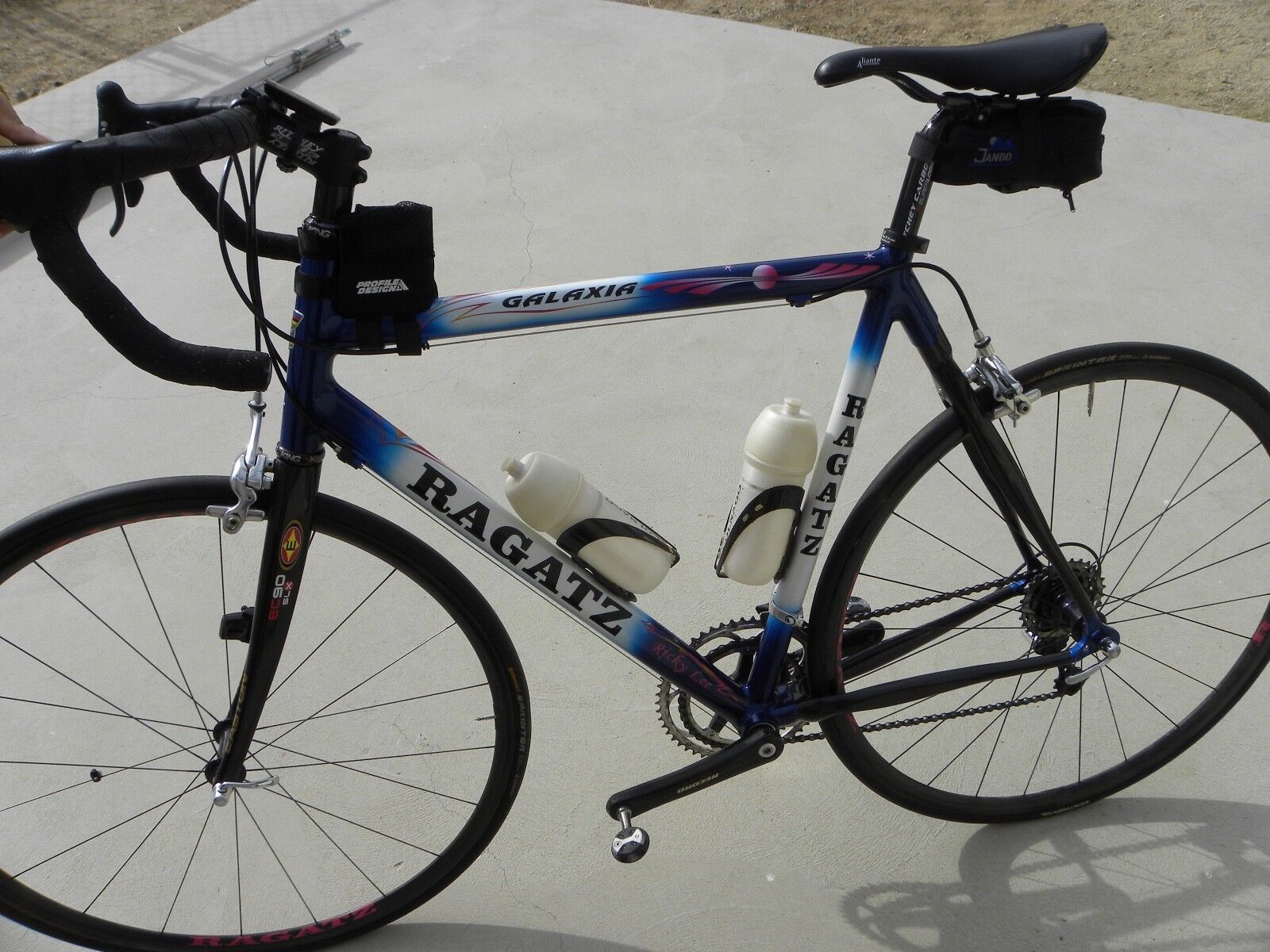 CLICK HERE TO VIEW THE PRICE
MORE DETAILS ON THIS BIKE 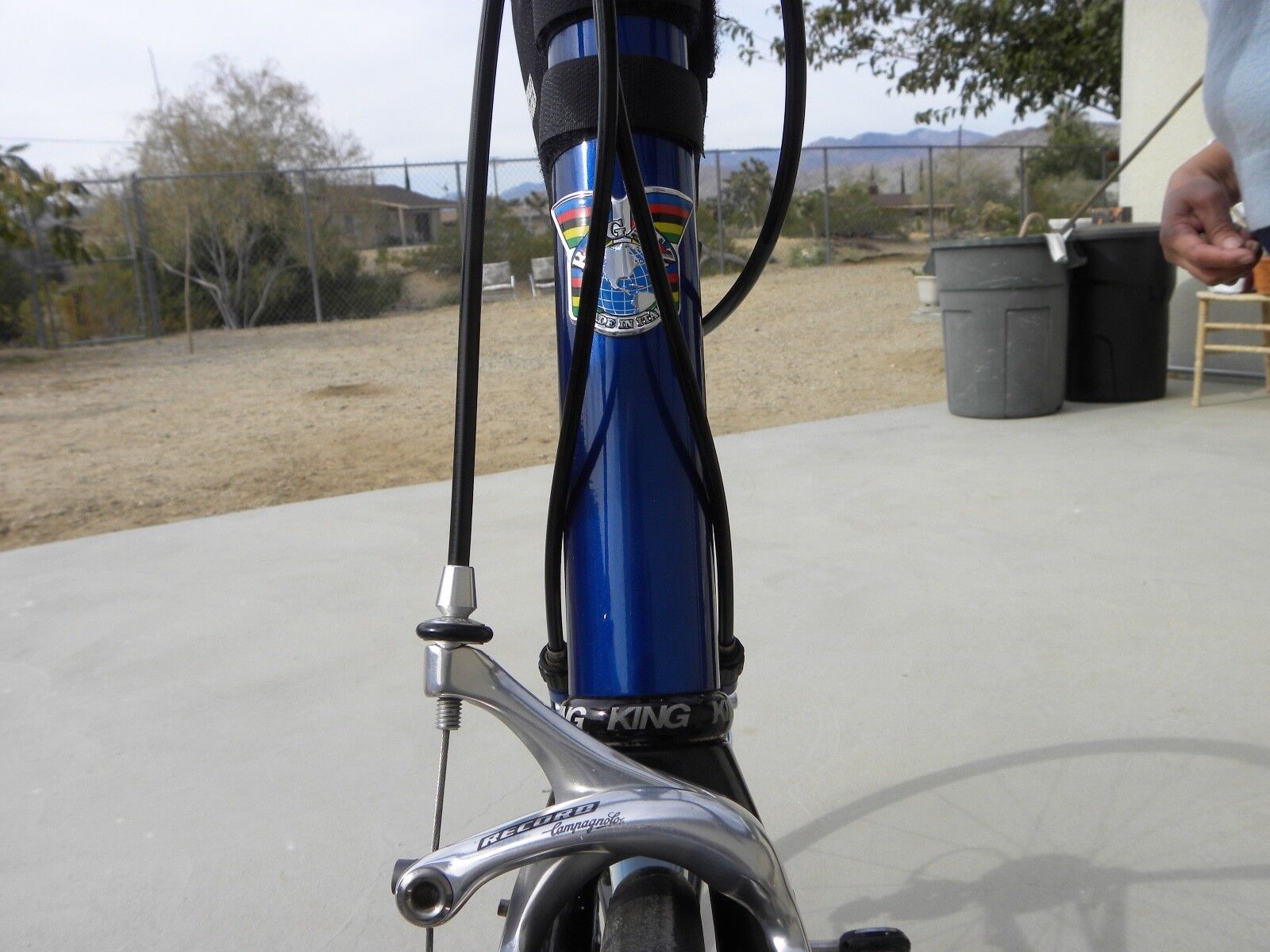 Do you want to see more pictures of this bike? Click Here

Equipment included: Frame: Ragatz Galaxia. Dedacciai tubing and carbon seat stays and carbon chain stays Crank: Campagnolo Record Carbon with 53/39 chain rings Front Derailleur: Campagnolo Record Titanium Rear Derailleur: Campagnolo Record Titanium Rear cluster: 13 14 15 16 17 19 21 23 29 Wheels: Reynolds Cirro SV KOM tubular wheelsets. These Reynolds wheels have an unreal ride quality, so smooth, yet stiff and strong. Very responsive, stellar on climbs, and still descend perfectly. At the time they were the lightest wheels out there Tires: Continental Sprinter Tubulars Fork: Easton EC90 SLX Handlebars: Easton EC90 Headset: Chris King Stem: Ritchey WCS (Although the top of it says Easton) Brake and Shift Levers: Campagnolo Record Carbon BB-System Brakes: Campagnolo Record Seat stem: Ritchey Carbon Superlogic Seat: Fizik Aliante with carbon rails Bicycle World USA in the sleepy little town of Santa Paula, California use to vie back and forth with a large bicycle shop in Chicago as the top selling Colnago bicycle dealer in the U.S. for many years. Santa Paula is a small town but the owner and his two sons were able to successfully build up Bicycle World USA as a Colnago powerhouse with the help of a lot of mail order business. By the time I discovered them, in 1999, the father had retired and moved to Montana, leaving the business to his two sons, Antonio and Jose Ragatz. I had a Colnago Arabesque at the time which I had purchased in 1984. On my rides I would sometimes drop in just to look at the latest Colnago offerings, and maybe purchase a Colnago tee shirt or a Colnago head band. I learned that their father had managed to get Colnago to cut them a slightly better deal on wholesale prices for their bikes, and that helped them sell them cheaper via mail order. When the father retired the two sons made the mistake of trying to force Colnago into lowering their prices further. When Colnago refused they somehow got in cahoots with a couple of older Colnago employees, and also the old man who painted Colnagos and was about to retire. They came out with their own line of beautiful frames under the name Galileo. Nothing illegal about that, except for the name they chose. The name Galileo was already in use as one of Pinarello’s models. It took Pinarello some time to get word of this, but once they did they hired an attorney and forced the Ragatz brothers to quit using the name. I believe it was about 2005 when the name was then switched from Galileo to Ragatz, the last name of Antonio and Jose. In 2004 I decided to purchase a new road bike. I was thinking about a Colnago C40 or C50. When I visited Antonio and Jose I saw their Galileo Galaxia frames for the very first time. They were the most gorgeous things I had ever seen. Dedacciai tubing incorporating carbon fiber seat and chain stays result in frames that are incredibly light, very stiff and yet offer a great ride. One of the nice things about dealing with Antonio and Jose was that they would set you up on any of their models for long test rides. You were able to take their bikes out for as many test miles as you wished and really compare them. Like Colnago, there were several levels of Ragatz frames to choose from. The Galileo Galaxia was their top of the line model. It was also something I knew I wanted. I sold my Colnago and ordered one custom built to my size, including a slightly longer steering tube so that I wouldn’t have to bend down as low while riding as I did on the Colnago due to my getting older and being a little less flexible. I also ordered one for my wife who was a triathlete. I had the bike only one year when I was hit by a car which broke my scapula in the crash. Fortunately the driver had insurance and I had another one built. By now it was 2006 and my new bike wouldn’t have the name Galileo on it. Instead, it would be a Ragatz Galaxia The bike is 14 years old but looks almost new. I’ve ridden it sparingly, using a mountain bike for all of my workout rides, and carefully wiping the Ragatz down after every ride, then storing it inside where it’s well protected. I also log all of my rides and the exact mileage on it is 1215. Should you like to see a copy of the log I keep I would be happy to email it to you. I photographed the only scrape I can find which is on the back of the seat as well as a little paint chipping on the right rear dropout. I had a new tire put on it in November of 2015, then had another one added in June of 2017 because I was retiring and moving away and thought the one remaining tire was getting old. I retired to the desert in June of 2017 and the roads out here aren’t good for a bike with road bike tires. It’s either a mountain bike or forget it Another nice thing about dealing with Antonio and Jose Ragatz was their knowledge about any and all components available for road bikes. Working with them I was able to hand pick every single component on this bike, and when I totaled my investment it came to a whopping $13,000! Total weight when I took delivery in August of 2006 including pedals, water bottles, cages, and odometer was 15.6 pounds